The Institute Charles Gerhardt Montpellier (ICGM) is a multidisciplinary research laboratory with five departments and nearly 500 staff. The ICGM contributes to the development of research in chemistry with the aim of developing and characterizing complex functional materials with a strong societal impact, particularly in the fields of health, environment and energy.

The mastery of the entire chain of expertise in the development of complex materials positions the ICGM’s research activities favorably not only in the Montpellier landscape but also nationally and internationally.

The project “A chemistry of materials at the service of human and society” led by the entire Institute, is structured around five axes:

These five axes, in strong interaction with each other, make it possible to organize research around the different scales of time and space that it is necessary to master in order to design innovative complex functional materials for applications in the fields of health, environment and energy.

One of the cornerstones of all this research is the desire to understand and use the different types of intermolecular interactions to propose synthesis strategies highlighting cooperative processes and synergies between different functional patterns.

The ICGM scientific project aims to create functional materials through the implementation of atom- and energy-efficient chemistry, to characterize them and describe their properties from the nanometric scale to that of systems, to evaluate their performance and to incorporate them into devices of use.

At the fundamental level, the ICGM’s priority is to ensure its identity at the highest international level in the themes of excellence of its research departments in the following five areas:

In terms of applications, the ICGM’s areas of research concern strong societal issues: 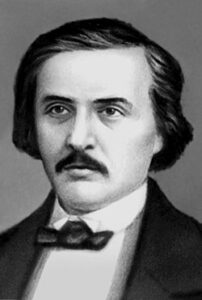 Born in Strasbourg on August, 21st 1816, Charles Gerhardt took his first steps in chemistry with Otto Erdmann at the Leipzig Business School.

After brief spells in his father’s lead factory and in the cavalry, he resumed his studies in 1836 in Giessen under the tutelage of Professor Liebig. He went to Paris in 1838 where he followed the courses of Jean Baptiste Dumas and worked with Auguste Cahours on essential oils, living precariously from teaching and translations of some of Liebig’s writings.

Benefiting from the influence of Dumas, it was in 1841 that he was awarded the Chair of Chemistry of the Faculty of Sciences of Montpellier, becoming Full Professor in 1844, a position he held until 1851.
Charles Gerhardt left Montpellier in 1848 for Paris where he established a School of Practical Chemistry which was not a real success. In 1855, he joined the Faculty of Sciences and the Ecole Polytechnique de Strasbourg and died on August, 19th of the following year.

The main facts of his career are the synthesis of anhydrous acids and in particular the synthesis of acetylsalicylic acid (aspirin). With his colleague Auguste Laurent, he contributed to reforming the methods of chemical formulation by insisting on the distinction between atoms, molecules and equivalents. He was the one who introduced the notion of function in organic chemistry. Among his main works are the Précis de chimie organique (1844-1845), and the Traité de chimie organique (1853-1856).